As we got closer to Vacaville the freeway began to thicken with flashing lights.  In our rear view mirror, there was a rope of blue and red stretching beyond our view.  Even in the civilian cars beside us we saw badges, patches, suits, dresses.  We all exited the freeway and the emotions began to rise.

The actual road became the parking lot.  Patrol vehicles lined three cars deep stretched at least an entire block. I tried to read the names of the departments as I deciphered the curved lettering on the rear of the black, blue, and white vehicles we passed.   Hundreds of  motorcycles reflected the sun on the opposite curb and literally drew a gasp from my mouth. Stunning.

When we approached the church, the sight became even more breathtaking.  There were badges from all over the country dressed in their Class As with the every button, snap, badge, and boot carefully and thoughtfully polished. Nevada, Washington, New York were a few that I noticed.  Every bay area city and agencies that stretched the entire state stood in the courtyard.  The emotion was moving. The feeling was somber.

Over 4000 people took their seats.  The casket was draped in an American flag and the bagpipes played as we stood while the hero, Officer Kenyon Youngstrom, was brought to the front of the church. I had been anticipating the bagpipes and the anguish that their sound would stir.

The memorial was beautiful. I have a new, deep respect for the CHP.  I commented to the CHP wives I knew that they should be very proud to be part of something so wonderful. It was clear that Officer Youngstrom's family had been very cared for and embraced by the CHP during the week that had passed since his End of Watch.  I am certain they will continue to find that support there.

May God bless each officer this day.  Keep them safe.  Keep there minds clear and their judgment sound.

To Karen Youngstrom and all four children, so many tears my family and I have shed for you whom we have never met.  Your support system stretches throughout the cities and across this state, even across the country.  You will continue to be remembered in our prayers in hopes of peace being brought to your hearts.

Comedic:  When CA Cop's partner shows up to back him up on a domestic call and the greasy pot head exclaims "Oh great that's all this world needs- more cops!"

Exhausting:  When CA Cop's department schedules 30 hours of class during his 3 days off- twice in one month.  Overtime pay is nice, but so is sleep.

Frustrating: When the young woman was beaten so badly during the rape that she is unconscious and the hospital refuses to do a rape kit without her consent.

Haunting: The bloated, decomposing face of the suicide victim, mouth open, left arm sticking straight up into the air.

Enraging: When CA Cop assisted the nine year old girl out  from the back passenger seat of the SUV her plastered mother was driving around town.  The mother so drunk that vomit stuck in her stringy blond hair and dripped onto her jeans as she swerved through the city streets.

Empowering: CA Cop hearing the sound of his cuffs clicking tightly on the wrists of one of the home burglary suspects, the thug's elbows raw and bleeding from the pavement they just encountered during the struggle.


Creating this list puts things into perspective for me as a Cop's wife. I know my job description better when I can sit back and analyze his.
I think that our home needs to be a place where he can find warmth, joy in his children, and some feet up relaxation time.  I will do my best with this in mind because I can only imagine what he carries on his mind.
Posted by CAcopwife at 8:11 PM 4 comments:

Email ThisBlogThis!Share to TwitterShare to FacebookShare to Pinterest
Labels: On The Job, Wife perspective

We went ahead and paid for some additional home security.  So far, worth every penny..... 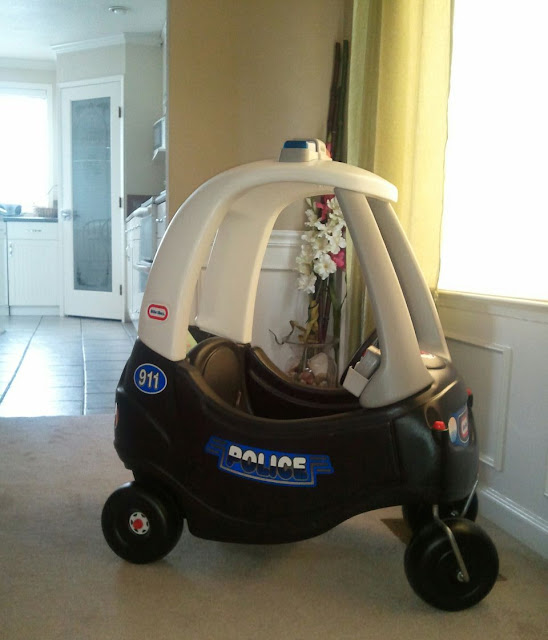 CA Cop could tell they were trying to avoid him. The late model Chrysler with the spinning rims made a few quick turns and caught the officer's darting eyes. The three male occupants were in their mid 20's- CA Cop correctly estimated as he called in the stop to dispatch. The driver of the teal green vehicle hesitated only briefly after his eyes met the flashing red and blue reflection in his rear view mirror. He pulled the pimped out ride to the curb of a main Baytown thoroughfare. CA Cop cautiously approached the vehicle.  Robotically, he pressed his fingers on the rear of the car.  The smell of skunk slapped him in the face and made the cop smile just enough to reveal that enchanting twinkle in his eyes.  He now had cause to search the group of hardcore players.  As he and his partners pulled each adult out of their sweet ride the cop couldn't help but noticed that brand names checkered their clothing.  A swag group, no doubt.  As CA Cop searched one of the males he felt a large bottle in the man's front pocket.  He lifted up the clear plastic bottle and discovered that his hand now held a container which was filled with an amber-yellow liquid.  A hand warmer was securely taped to the outside of the bottle keeping its contents at, shall we say, "body temperature" warmth.

Yes folks. our thugged out, clean fitted gentleman was carrying a bottle of urine in his designer jeans.

Well at least that's what I would do.  At this point, I don't know if things like this still shock him.

CA Cop stared in disgust, "What the hell are you doing with your life, brother? Your are 25 years old and driving around with a bottle full of piss in your pocket just so you can get high? And not fail your drug test? You are a loser. Only a complete loser would have someone else's piss in their pocket."

Hey honey, at least he showed some ingenuity with the hand warmer and scotch tape.  Points for that, right?
Posted by CAcopwife at 11:01 PM 1 comment:

Email ThisBlogThis!Share to TwitterShare to FacebookShare to Pinterest
Labels: On The Job

So I was with a girlfriend the other day.  She needed to pick up her stolen car that was recovered by our Hometown PD.  I was there for moral support.  It was interesting to watch her, as a victim of the crime.  We came armed with antibacterial wipes and rubber gloves, convinced that whoever perpetrated such a crime must've also left all kinds of bodily fluids and goo throughout the vehicle. CA Cop had offered his input:

"The interior will have ashes everywhere and smell like bud. Oh and an empty hard liquor bottle will be rolling around on the floor board of the back seat."

I went ahead and looked up some information online about reclaiming a stolen vehicle and ended up reading horror stories about drug needles left pointing up in the drivers seat and all sorts of awful things. *I recommend skipping this step if you ever have to go pick up a stolen vehicle*

We were greeted by the friendly woman at the front desk of the Tow Company (wolf in sheep's clothing, let me tell you, just wait til you hear what the bill was).  She went on and on about what a cute car my friend had and that it was in great shape.  We followed her out to the tow yard and there amidst crumpled and neglected vehicles was my friend's shiny sedan. It appeared out of place among its current company.  We hesitantly approached it and peered in through the windows.  The driver and passenger seats were reclined so far back that they were nearly resting on the backseat. I rolled my eyes at this observation as I pictured the freakin' thugs who may have been lounging in her vehicle. Other than that the interior looked unscathed, I mean seriously not an ash nor a bottle. Not a hair and certainly no needles.  We gloved up before we touched anything and wiped it down with the germ removers three times over for peace of mind.

Her car had been in the tow yard for an hour and a half and had been towed less than three miles to the yard.  The bill was $300.  Yup.  I was shocked, I felt like she was victimized twice.

It was an interesting experience, one that I hope to not have to repeat.  Later that evening I was explaining to CA Cop just how clean the interior of her vehicle was when it occurred to me,

"Hey, how come Hometown PD didn't dust for fingerprints or anything? I mean clearly they didn't because there was no dust in her car."

"I never dust for prints"

"Nope, well I guess I occasionally do a what I like to call a 'PR dusting'."

Half joking I said, "What do mean? The owner is standing right there so you sprinkle some dust around his car with no intention of lifting a print?"

I sat there and pictured this. Him sprinkling dust everywhere, the poor victim hoping the dirt bag will be brought to justice. But its just not a priority in Baytown or in Hometown. CA Cop says there are hundreds of fingerprints in and around cars and its just not practical to collect the prints.

So what's your experience with stolen vehicles? Is this typical where you live/work? Were you shocked by that tow fee?
Posted by CAcopwife at 11:20 PM 5 comments:

My heart is breaking for the family of 19 year police veteran of Vallejo PD, Officer Jim Capoot. He was gunned down and shot in the back multiple times while pursuing bank robbery suspects.  He leaves behind a wife and three daughters.  I ache for them. On the news last night they kept showing the flag draped casket leaving the hospital surrounded by the somber officers with empty expressions as they treated their fallen brother's remains with care and dignity.

Thank you Sir, for your service and your sacrifice.  God bless your family.

The full story is located here. 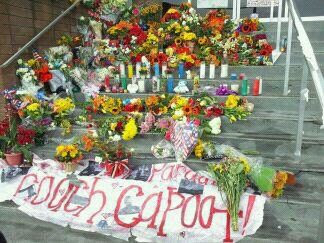 Email ThisBlogThis!Share to TwitterShare to FacebookShare to Pinterest
Labels: Officer Down

Seated around the table. We chatted as we chewed our food and enjoyed the meal.  My mom had cooked one of CA Cop's all time favorites and he happily worked away at the meat and potatoes on his plate.

"This ham is great!" He announced in the direction of my mom.

Across the table my older brother couldn't resist, "Isn't that kinda like cannibalism?"
Posted by CAcopwife at 8:46 PM 4 comments:

CAcopwife
I'm a wife to a handsome officer (CA Cop). He joined the police force in February of 2010. I'm a mom to daughter Sierra, 4 and son Shasta, 2. We live in the bay area. I'm so proud of CA Cop and the work he does to protect the community he serves. I hope to connect with others in the law enforcement community and share my stories as I navigate my new life as a California cop's wife.